In 1675, John Ogilby compiled the first proper road map of England - previous ones had been of little practical use. He called himself ‘Cosmographer to the King, Charles II’.

On his map, the only road in Derbyshire is shown going through Hognaston, when it would have been little more than a cart track. Ogilby measured the distance not only in miles, but furlongs as well, all this with nothing more to help than a wheel geared to a counting device.

People have lived on the site of the village for at least a thousand years (the village was entered in the Domesday book as Ochenaueston : King's land). It is probable that the site was inhabited in Roman times (evidence of possible lead smelting has been found from this era) and it probably stood on the main Roman road to Little Chester.

It was a thriving community when the coaches ran through the village from London to Manchester in the seventeenth century, when the village boasted three inns, instead of the current one, the Red Lion, which has stood at least since those days. 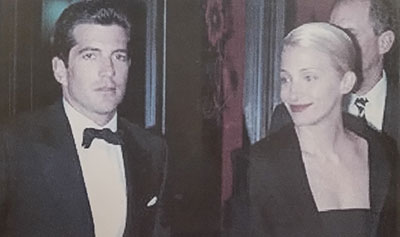 On the 11th & 12th April 1997 the son of the former 35th President of the United States of America attended a marriage in the village of Hognaston, with his wife Carolyn Bessette. They stayed at the Red Lion Inn on the Saturday evening before moving on to Chatsworth the following day. Unfortunately he, his wife & sister-in-law were all killed in in an air crash on the 17th July 1999. As a tribute we have named one of our guest rooms "The Kennedy Suite" in their honour.